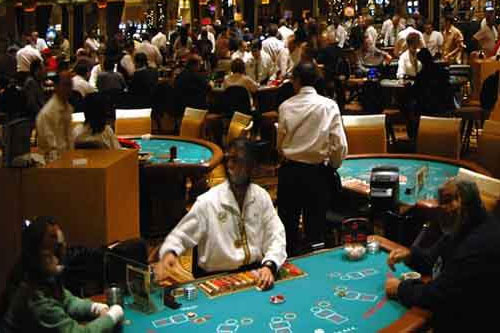 While Vegas may be the adult playground, it’s not exactly a jungle gym. Knowing how to behave in certain situations will go a long way toward making your trip enjoyable, especially if you plan on spending a lot of time at the slots or tables.

The first thing to understand is that tipping is not for a job well done, it is to ensure someone does not do a crappy job.

The majority of the service industry, from the cocktail waitress to the guy carrying your luggage makes an hourly rate barely above the federal poverty line, and the IRS taxes them for tips, whether you tip them or not. So basically if you’re wondering why the bellhop is grumpy after you gave him a buck for spending the last half hour of his day carrying your 35 bags around, it’s because he actually lost money helping you.

I know what you’re thinking “why doesn’t the casino just pay them more, they have all my money after all”.

And this may be so, but think about it this way, tips are incentive. If every bellhop and valet made only what the casino paid them, there’s not incentive to do a better job and you would see customer service deteriorate.

With that in mind, here is a helpful breakdown of approximately how you should tip:

How to tip at the tables:

We went through the amounts, $1/ win or $5/ hour at the table minimum if you’re not winning (if you’re there an hour and haven’t won 5 times you should probably leave anyway). If you are new to gambling, watch how other players handle tips and follow suit. It is customary to announce your intentions before throwing them a tip so they are not confused as to your actions “is he betting? Does he want change?” Also, wait until the action is complete. Don’t tip while the ball is rolling in roulette, mid dice throw in craps, or while the dealer is shuffling in blackjack. Wait until that hand or roll is complete, and tip the moment before the next round is set to begin.

Nevada does not have a State lottery, instead we have Progressive Slots. The biggest payout is Megabucks, and the biggest win ever was at Excalibur, a meager 39.7 million – not much compared to many State lotteries, but you could probably buy a boat or something. In Las Vegas Megabucks resets at $10 million after someone wins, and progresses until there is another winner. The second most popular Progressive Slot is Wheel of Fortune, with winnings generally in the 6 digits. There are a number of others including Millionaire Sevens which all have slightly lower payouts.

Pictures in the Casino – Don’t pull out your camera anyplace people are gambling. In fact most casinos discourage pictures period (high rollers and celebrities busy cheating on their wives and all) so keep the camera phone in your pocket unless someone is calling you.

Saving Seats – Mmmmmmmm, okay, as long as it isn’t busy. If someone really loves the seat you’re saving, you technically aren’t allowed to save seats. No firsties. Some people like to play multiple slot machines simultaneously. Mathematically this does not help your odds one iota, but go for it as long as it is not busy. If you see machines filling up around you, or someone asks to play on one of your machines, time to give it up.

Leaving the table or Slot Machine for a Quick Break – I’ve heard people say “leave a chip face up”, or “leave your jacket or purse”. No, no, no. This is Sin City. Someone will take your chip or jacket or purse. If you are at a table, tell the dealer you will be back and they will save your seat if they can. If you are at a slot machine – cash out, tilt the seat against the machine, and when you come back maybe it will still be open. There are no guarantees though. Never, ever leave personal belongings anywhere in a casino.

Criticizing Other Players at the Table – I’m sure the guy who has been dealing Blackjack for 20 years is highly impressed by the 20 minute Blackjack course you took, and the Rules of Blackjack book you read on the flight over, but most people are in Vegas to have fun. If you do not like how other players at your table are betting, move to a different table.

Smoking – Anywhere within a Casino that does not say “No Smoking” you are allowed to light up. Nevada recently passed a no smoking in bars law, however nearly every bar has smokers and ashtrays a-plenty, and there doesn’t seem to be a huge fuss about it. For non-smokers, if it becomes bothersome, most Casinos will have a designated non-smoking section.

Don’t Touch Other People’s Chips – I know they’re pretty and sound cool when you clack them together, but chances are they will think you’re trying to steel something. (Yeah, should go without saying, but you’d be surprised. Don’t touch other people’s chips).

No Phones in the Sports Books – It’s an antiquated rule in the age of the internet, but a rule Casinos still hold to. There was a time when for instance the West Coast wouldn’t know the results of an East Coast game until the Networks replayed it. So yeah, for some weird reason you still aren’t allowed to have phones in the Sports Book.

Wear a watch or bring your cell phone. Casinos don’t have clocks.

If you want to play a game, but are not sure how, just ask the dealer. They want you to play and learn, and will be very helpful.

Despite the fact your bleeding chips and the dealer is still smiling, he/she is not out to get you. Dealers are paid to smile as well as deal, and their tips depend in large part on you being happy. Don’t take your bad luck out on the dealer.

In line with the last, even if you “know” how to gamble, it doesn’t hurt to take the dealer’s advice. They have been playing this game 40 hours a week for a number of years, and there is a good chance they know what they’re doing.

Seem like a lot to remember? Don’t worry, no one expects every tourist to know every vague Vegas rule of etiquette. Remember you’re just here to have a good time. If you are curious about something, just ask a casino worker. They’re the experts.