No of Rooms35
Floors3733
LocationOn Strip 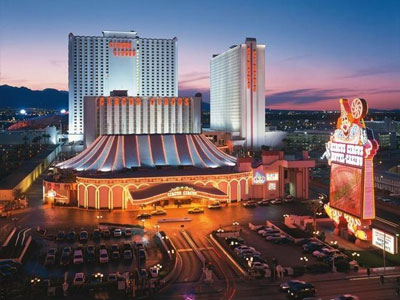 While a number of casinos have areas designated for kids including arcades and rides, and some like Excalibur even have a family theme, Circus Circus may be the only Hotel Casino in Las Vegas really “made for the family” with a list of rides and entertainment perfect for kids of all ages and adults alike. Circus Circus opened its doors in 1968 and has been the backdrop in many popular movies from “Diamonds are Forever” to “Austin Powers: International Man of Mystery.”

The Adventure Dome, the section of the hotel casino where the rides can be found, is the largest space-frame dome in the United States. Circus Circus has a large casino as well, with live circus acts performed overhead 24 hours a day like acrobats, jugglers, clowns and more as guests play.

Located on the northern end of the Strip; despite being one of the oldest Strip hotels it still enjoys a large number of visitors. By Strip standards accommodations are very affordable and it may be full for a large part of the year, especially during busy seasons. Booking ahead is recommended.

This is part of Circus Circus, but is an attraction within itself and is highly recommended for families no matter where in Las Vegas you are staying. It is the only permanent circus/ amusement park experience in Las Vegas and has a number of exciting rides and games for children and adults alike.

While gambling may not be what Circus Circus is best known for, it does have a large casino floor that is usually fairly busy, similar to most Strip Casinos. It has all of the normal table games from Blackjack to Roulette, and limits are on the lower end for the Strip most times of the year. In addition they may have specialty games guests will not find in other casinos. They have a wide variety of slot machines with different limits as well. They have a decent size sports book, only seating 80 (smaller than many Strip Casinos) but with 68 televisions and 18 big screens.

Circus Circus has 3,774 rooms, and is one of the bigger hotels on the Strip, however some of the towers are separate from the main area, so unlike a number of other hotels on the Strip, it does not qualify as one of the largest hotels in the world. Circus Circus has an RV Park as well, and is the only place for RV’s on the Strip. All areas of the casino including the rooms are connected by the shopping and restaurant areas which are located on the casino floor. Rooms are considered average size, and perhaps a bit older than a lot of accommodations on the Strip.

Along with a variety of activities for kids, Circus Circus is known for affordable rates by Strip standards, and the rooms are comfortable though not considered the highest quality compared to some of its neighbors. Circus Circus is recommended for families who want to stay on the Strip and would like to save money on their accommodations, and is not usually an ideal spot for adults only or a younger “party” crowd. It should be noted that guests receive a “booklet” of great deals on rides and meals when they register, which can also save families money.

Perhaps the biggest surprise amidst the Circus Circus carnival acts and general children’s theme, is an extremely highly rated steak house, The Steak House. No Happy Meals here. For more casual dining there is Mexitalia, Rock and Rita’s, and they also have a huge and very popular buffet. There are several other restaurants both within the casino and in the Adventure Dome

As with all casinos in Las Vegas, cocktails are served to gamblers by waitresses, and these are free though tipping is customary. There are also bars on the casino floor where you can sit down and order a drink. There is however no official “bar” in the casino catering toward the 21-and-overs who want to have a few drinks in a bar atmosphere.

There is a shopping promenade, and this is also where many of the restaurants can be found. It features 20 outlets appealing to a wide range of people, and includes the popular Criss Angel MINDFREAK Superstore.

Circus Circus has no nightlife aimed toward adults other than gaming.

All regular services of a hotel on the Strip. They also offer free shuttle service to and from the airport, which is not offered by many casinos.

Circus Circus provides meeting space for parties of up to 600.

Circus Circus has three pools, one in the RV Park and two in their Skyrise Tower.

Circus Circus has live circus acts, but no shows where one would purchase a ticket.

Circus Circus does not have a spa, but does have workout areas and a salon.