No of Rooms28
Floors3626
LocationOn Strip 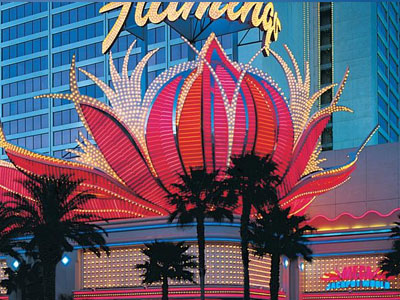 The Flamingo is one of the best known casinos in all of Vegas, and in the world, and is the setting for numerous Vegas stories and even Hollywood movies. It was one of the first casinos on the Strip and is considered by many the first mega resort in Las Vegas. Its mob roots and connection with Bugsy Siegel is well-known, though it has gone through numerous renovations since and today it is a completely different place and corporate owned.

It is easily identified right on the Strip by its unique pink facade. It is a very large casino, but average by Strip standards. They offer a wide range of services and it is one of the more popular casinos on the Strip and in the world even today. That said, by Strip standards the Flamingo is often a bit less busy than other nearby casinos. Rates may also be lower than nearby casinos depending on the specific season and any events within the casino.

Booking ahead is always recommended, Strip casinos fill to capacity regularly in the summers and during busy weekends and holidays.

Flamingo has a huge casino at 77,000 square feet and it has 2,100 slot machines and a number of table games. They host all of the classic casino games plus a few harder to find games like Million-dollar Keno, Let It Ride, and Super Megabucks. They have a large poker room that is usually fairly busy. They have a large 100-seat race and Sports Book with 63 televisions and six big screens. Limits are average by Strip standards and in some cases a bit lower. Ask about high limits gaming.

It is a huge hotel with 3,626 rooms all in a single tower. Rooms are large and very comfortable and have been renovated. Room rates are fair by Strip standards but it should be noted that it is one of the older casinos and ratings for these rooms does vary. Most stay at the Flamingo for the gaming, entertainment, shopping, and great restaurants, and it’s relatively low prices by Strip standards.

Strip casinos are generally expensive compared to anywhere else in Las Vegas. Flamingo has some of the better rates on the Strip. Gambling limits vary by the crowd but are often lower than other casinos. Room rates also tend to be a bargain. Shopping and show tickets are comparable to other nearby casinos.

You’ll find a number of options when looking for something to eat in the Flaming. Jimmy Buffets Margaritaville is one of the most popular spots on the Strip for a younger, “party” crowd. Other options include Tropical Breeze, Paradise Garden Buffet, Hamada of Japan, Beach Club, the Pink Bean, Promenade Food Court, The Burger Joint, Steakhouse 46, and The Terrace.

As with every casino, drinks are free for gamblers, but tipping the waitress is customary. You will also find a couple of bars on the casino floor which serve alcohol 24/7, and Margaritaville and Sin City Brewing Co. are both popular bars.

Flamingo has a large shopping area with a  range of boutiques from higher end to bargain. Some of the more popular stores include D’Finess, Promenade Gift Shop, Go Sexy, Factory, Smuggler’s Margaritaville, and Luxury at $10. They also have a UPS store inside.

Flamingo is one of the few centrally located Strip hotels that does not have a night club. They do have two very popular bars open 24/7, Margaritaville and Sin City Brewing Co.

Flamingo offers a wide range of services and all of the services of any of the hotels on the Strip from maid service to turn down, luggage, wake-up calls, laundry, and more. Ask your concierge if you have specific needs. They also offer shuttle service and the Flamingo is one of the stops on the Las Vegas Monorail, making travel anywhere on the Strip fast and easy.

They do have convention space. Ask your front desk or concierge for details. Flamingo is also a popular destination for those attending conventions at nearby hotels or at one of the larger convention venues in Las Vegas.

The Flaming has a large 15-acre pool are with three separate pools and a Jacuzzi. They also have Go Pool, which is a pool club for 21 and over.

Flamingo has a number of popular shows including George Wallace, Nathan Burton Comedy Magic, Donny and Marie, Vinnie Favorito, and X Burlesque. They also host XBU which stands for X Burlesque University where they teach you how to be sexy on stage like a showgirl.

Aptly named “The Spa” the Flamingo spa offers a range of services and the Alexandra Noel Salon is located just outside.