No of Rooms31
Floors2956
LocationOff Strip 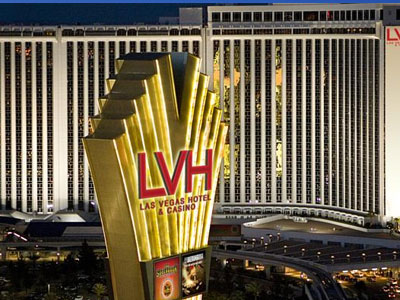 Opened in 1969 under the name International Hotel, this is where Elvis Presley first broke all Vegas show attendance records. Today it still regularly books headliners, and in addition is perhaps the single most popular choice of hotels off the Strip for convention goers and business people. The Las Vegas Hilton is approximately one city block east of the Strip on Paradise Rd. It is enormous by off Strip standards and is considered one of the largest hotels in the world.

Nestled right next to the Las Vegas convention center, it is easily identified by the large “H” on the side of the hotel. It is a main stop for the monorail so despite its off Strip location nearly any casino on Las Vegas Blvd is only minutes away. It has seen a lot of renovations in recent years and is considered a high class luxury hotel with a four star rating. Hilton is the home of the popular Star Trek, Star Wars, and Comicon conventions and as such is often an odd mix of business oriented guests and these more colorful convention goers.

The Las Vegas Hilton is an extremely busy hotel by off Strip standards due in large part to its location adjacent to the Las Vegas Convention center. The Hilton does however have a massive number of rooms so while much of the Strip may be filled to capacity during specific busy weekends and holidays vacationers may have luck booking a room here. Still, booking well in advance is highly recommended here and throughout Las Vegas during the summer, holidays, and any weekend year round.

The Las Vegas Hilton has a very large casino floor, and one of the largest of any off Strip casino at 100,000 square feet. They feature all of the popular casino games including Blackjack, Craps, Roulette, Baccarat, Keno, Pai Gow, Big Wheel, Let It Ride and more. In addition for all of the Star Trek and Star War fans who frequent the Hilton (and for anyone who loves something a little different for their gambling experience) they have a SpaceQuest room with unique space-based gaming. This is recommended at least once even if you are not a huge sci-fi fan. They have a giant Sports Book seating 400 with 42 televisions and 30 big screens. It is one of the more popular Sports Books in Las Vegas.

The Hilton has 3,000 rooms and very large suites. The rooms very clean and well kept and are generally highly rated. Much of the interior is new.

The Las Vegas Hilton is moderately prices and an excellent option for anyone visiting Las Vegas on business or for a convention. It is also a popular spot for vacationers however it is a bit more expensive than a lot of off Strip casinos. It is also a higher quality destination than a number of options outside the Strip. Gambling limits are moderate to high depending on the clientele. Shopping and restaurants are moderately priced.

The Hilton has a number of options for restaurants including Benihana, Casa Nicola, Fortuna, Garden of the Dragon, Paradise Café, The Buffet, TJ’s Steakhouse, and Tres Rios. They also have a Food Court and a snack bar.

There is only one lounge located within the Hilton, Tempo. There is a casino bar. Cocktails are free to gamblers and tipping is customary.

Perhaps the most interesting shop within the Hilton is the popular Sci-Fi Zone, they also have a candy shop, toy store and beauty salon with a number of products. Hilton is home of Charisma Apparel & Footwear

Tempo is a popular nightspot, but lower key than most of what one will find on the Strip or Downtown. There are no clubs or 24/7 bars, however the casino bar serves at all hours.

Hilton offers services on par with Strip casinos from room service to maid, luggage, and concierge service. There is free shuttle service to and from the airport through an outside company. It is also a main stop on the Las Vegas monorail.

Hilton is one of, if not the most popular hotel for conventions due in large part to its location next to the Las Vegas convention center. In addition they have tons of convention space within the hotel, around 200,000 square feet.

The Las Vegas Hilton has one large pool that has a view of the Strip. They also have a Jacuzzi.

The Hilton books headline entertainers at Shimmer Cabaret and the Hilton Theatre. It is also home of an Elvis tribute, The King starring Trent Carlini, Nunsense, and Greg London Impressions that ROCK!

Their spa offers a number of services. Call for details.