No of Rooms30
Floors4407
LocationOn Strip 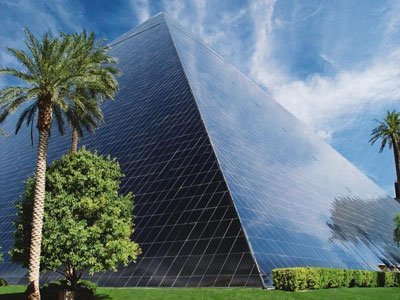 If you want to see the pyramids you can go to Egypt, or Las Vegas. The Luxor is an iconic hotel casino located on the south end of the Strip next to Mandalay Bay. The 30 story black glass pyramid is one of the largest casino floors in Las Vegas and in the world at over 100,000 square feet with over 2,000 slot machines. It is also home of the world’s largest atrium with shopping, restaurants, and entertainment. The unique and beautiful shape and gorgeous greenery surrounding Luxor is not the most eye-catching feature however, at night the single beam of light emanating from the tip can be seen from miles around.

The Luxor originally used their Egyptian theme throughout, often attracting families and an older clientele. Today they have reinvented much of their image and modernized much of the interior with lounges and bars and a look that attracts the 20 to 30 something crowd. It is also right next to Mandalay Bay which is one of the most popular casinos on the Strip for a younger party crowd. It’s not all partying though, check out the world famous Bodies Exhibit for an amazing and educational time.

Though Luxor (along with Mandalay Bay) are located on the very south end of the Strip, they none the less are a couple of the most popular casinos in Las Vegas. Luxor is often filled to capacity during the summer and during popular weekends and holidays. Specifically any holiday or weekend with a large number of students like Spring Break the Luxor will fill quickly. Making a reservation far in advance is highly recommended.

As mentioned the Luxor has one of the largest casino floors in the world at 120,000 square feet. They have a wide range of slot machines, over 2,000, many with an Egyptian theme but a number of the more popular games as well including Megabucks. They feature all of the popular table games and have a nice poker room as well. In contrast to most of the casino, they have a smaller Race and Sports Book (compared to other Strip casinos) at 110 seats, 128 individual monitors and 5 big screens.

The Luxor is a very large casino with 4,408 rooms. These are spread across a couple of towers however and the Luxor does not make the list of the world’s largest hotels (unlike several Strip hotels which are on the list). They are known for having very large rooms and suites and rooms for high rollers are available as well. They are clean and well-kept and recently renovated. Generally the rooms are rated only moderately, this may be do more to price than quality however as Luxor is one of the pricier casinos yet they do not offer the level of luxury many of the others offer.

Nearly all Strip hotel casinos are on the pricey side with a few exceptions such as the Tropicana and Flamingo. Luxor is a bit above average as far as price compared to other hotels on the Strip. Price will vary by occupancy and season. Gambling limits also vary by the clientele and the number of open tables; they are relatively high for the most part. Shopping, restaurants, and drinks are also on the expensive side when compared to Strip hotels. It should be noted Luxor is less expensive than Bellagio, Four Seasons, and other higher end stays. It is not the place to stay if you are looking to save money however.

The Luxor is an excellent place to eat if you don’t mind spending a little extra. They have several very popular restaurants including Backstage Deli, TENDER Steak & Seafood, Pyramid Café, Rice & Company, T & T Tacos & Tequila, and several others. There is also a food court, Starbucks, and a popular buffet.

You have tons of options. Luxor caters to a party crowd and some of the popular bars include High Bar and Playbar. There are bars on the casino floor and these are generally lively. Drinks are free for gamblers and tipping you cocktail waitress is customary.

You’ll find tons of shops in the promenade. Some of the popular ones include Fashion 101 and LX Fight Shop. There are 41 others, many can only be found at Luxor.

The Luxor has amazing nightlife. If you’re looking for a good time in Vegas save your cab fair and get a room at Luxor. Some of the most popular Vegas spots located right in the Luxor include Cathouse Loungerie, LAX, Flight, Aurora, and Liquidity.

Luxor offers all of the services expected of a Strip casino including maid, turndown, luggage, concierge, 24/7 room service and more. They are also a convenient stop on the monorail making travel to different casinos fast and easy and they offer free shuttle service to and from the airport through an outside company.

A five acre pool along with Jacuzzi is open to guests.

The popular CRISS ANGEL Believe and Carrot Top shows can be found here. They also feature Menopause the Musical and Fantasy.

You’ll find the Nurture Spa and Salon here with multiple messages and other services available.