No of Rooms30
Floors6852
LocationOn Strip 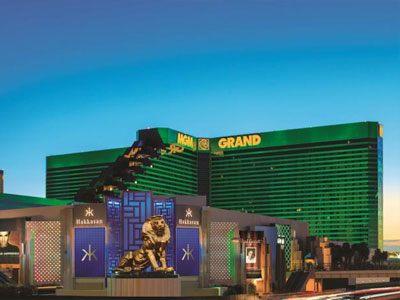 It’s the largest casino in Las Vegas at 171,500 feet of gaming space, and the fifth largest hotel in the world (and the third largest hotel in Las Vegas) so it lives up to its name. You can’t miss it on the north east side of the very busy corner of Tropicana and Las Vegas Blvd, with an absolutely enormous golden lion statue at the entrance and the green Emerald City inspired green exterior. When first built it indeed themed itself on the Wizard of Oz’ city of emeralds but quickly moved to a more adult theme. It is till a very popular spot for families however and is conveniently located kitty-corner from the Excalibur and straight across from the New York-New York; also two of the popular family spots on the Strip.

For many years MGM had more to offer than any single casino in Las Vegas, today Mandalay holds that honor but MGM still has tons to do for a wide range of people from children to adults and even older vacationers. Some of the main non-gaming attractions include a free Lion Habitat right on the casino floor, the CBS Television City Research Center where you may screen new television shows, and the CSI: The Experience.

MGM Grand is well known all around the world and one of the most popular hotels on the Strip. Even though it has an enormous number of rooms at 5,034 it often fills nearly to capacity on busy weekends during the summer and on popular holidays. It is suggested you try booking a room at the MGM if other hotels on the Strip are filled, but it is very important to make reservations well in advance, particularly during popular family oriented holidays and busy summer weekends.

It is the largest casino floor in Las Vegas at 171,500 square feet. Don’t get too impressed however because it is not even in the top ten largest in the world. The largest casino floor is the Venetian in China at around half a million square feet. Still, the MGM Grand is enormous and it features all of the popular casino games from Blackjack to Roulette and everything else you’ll find in any Vegas casino. It also has tons of slot machines in every corner of the casino floor, a large poker room, and considering its size a relatively small Race and Sports Book at only 104 seats, 94 televisions and 44 big screens.

Perhaps the primary complaint of the main hotel space of MGM is quantity over quality as far as rooms. They are however priced fairly well by Strip standards and there are a number of suites available and extremely high-end rooms for high rollers and “whales” as they are called in Las Vegas. They are clean, well kept, but on the smaller side and a bit crowded when compared to most of the Strip accommodations.

The MGM is within the medium price range for the Strip, which is considerably higher than most places off of the Strip. The rooms however are priced a bit lower – this though is balanced by the fact they are also smaller and less impressive all together than many of the surrounding hotel rooms. Gambling is also moderately priced and can vary according to the clientele at the time. There is gambling available for high rollers. Restaurants and shopping is in the middle range. MGM Grand cannot be considered a bargain even by Strip standards, it is in a great location however and on some of the busier weekends may be one of the last places to fill do to its sheer size. Making your reservations well in advance is always recommended.

There are bars throughout the casino floor and drinks are free for gamblers, tipping of course is customary. Tabu ultra lounge doubles as a nightspot and during the day a bar/ restaurant. MGM Grand is not a top choice for party goers outside of Tabu and Studio 54.

As mentioned MGM Grand is not one of the top choices for party goers. Tabu and Studio 54 are however popular spots with mostly a tourist crowd.

MGM Grand offers all of the services of any Strip hotel from room service to maid, luggage, laundry, and more. It is also a convenient stop on the monorail so most of the Strip is just a short ride away. Keep in mind, MGM Grand is one of the few hotels that charges for a shuttle ride to and from the airport.

They have an enormous 29,000 square foot spa area with 20 treatment rooms, massage and additional services. Cristophe Salon is located here.