No of Rooms30
Floors3044
LocationOn Strip 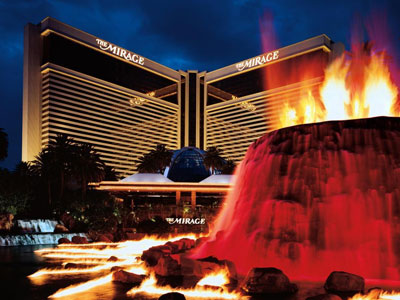 It is a classic of the Strip and one of the best known and most popular casinos in the world. With an oasis theme mixed with luxury and a complete modernization over the last decade, this relatively old casino continues to attract a large number of visitors even as newer casinos and hotels are constantly going up. It is most easily identified by perhaps the 3rd most popular free street side attraction in Las Vegas after the Viva Vegas Downtown and the Dancing Water Show in front of the Bellagio - the Mirage Volcano blasts off with real fire and all kinds of noise every half hour after dark.

Mirage clientele is varied, attracting families on popular family holidays, keeping its older clientele who first began coming to the Mirage when it was erected in 1985, and many of its restaurants and JET nightclub is very popular with a younger party crowd.

As mentioned it is still one of the more popular casinos on the Strip. For a time it was something of the Jewel of Vegas, the few years after opening. It has however declined in popularity as newer and more modern hotel casinos go up. Despite this it fills to capacity regularly, especially on popular holidays and summer weekends. This is also a popular spot for convention goers, with a large convention area itself and conveniently located near the Las Vegas Convention Center. Booking well in advance is highly recommended.

The casino floor is on the smaller side by Strip standards, though at the time it was one of the larger casinos. They do however have a lot of slot machines, more than many casinos with larger floors. They have several tables with all of the classic casino games including Craps, Blackjack, Let It Rid Caribbean Stud Poker, Keno, Pai Gow and Pai Gow Poker and more. It has a popular smaller poker room, and a very large Race and Sports Book seating 269 with 29 televisions and 10 big screens.

The Mirage, though not one of Vegas’ larger hotels none the less has a ton of rooms at 3,044 – and all in a single tower. In addition they have a number of luxury suites and a Villa and Lanai area for high rollers on the casino floor close to the Mirage theatre area. Rooms at the Mirage are priced a bit higher than average by Strip standards; however they are generally well reviewed. Despite the number of rooms reserving well in advance is highly recommended and it fills to capacity regularly.

Here the Mirage may run into something of a conundrum because it is rated at 4.5 stars, but priced closer to the 5 star range. It is though reviewed higher than most 4.5 hotels in Las Vegas and most feel it is worth the price. The room rates are above average for the Strip, and gambling limits are also higher. Limits depend in large part on the clientele. Restaurants and shopping are each moderately priced by Strip standards.

You’ll find a couple of lounges within the Mirage and a centrally located bar on the casino floor. Drinks are free for gamblers, tipping is customary.

Mirage has a number of shops on the opposite side of the front entrance including OPTICA, The Men\'s Shop, Impulse, The Mirage Shop, Watch Boutique, Art of Music, Paradiso, Sugar Factory, Cirque/LOVE Boutique, Kardashian Khaos.

JET is one of the more popular nightclubs on the Strip. Other lesser known but equally entertaining options for nightlife include Revolution Lounge, Rhumbar, B.B. King’s Blues Club, and the King Ink Tattoo Studio and Bar.

Mirage offers all of the services normally provided at a Strip casino including maid, turn down, room service, luggage, concierge, and more. The Mirage is one of the few hotels that charges a fee for shuttle service to and from the airport, so keep this in mind as you book your trip.

The Mirage has tons of convention space, more than 170,000 square feet total including an enormous ballroom and several smaller meeting areas.

Mirage has a large tropical pool area with a Jacuzzi for guests only and Bare which is a topless pool club open to the public during the summer.Shows


The popular Cirque du Soleil production LOVE plays here. Terry Fator is a popular entertainer with a regular show at the Mirage.

Mirage has a moderately sized spa with a number of services, call for details. KIim Vo Salon is located here as well.