No of Rooms32
Floors3002
LocationOn Strip 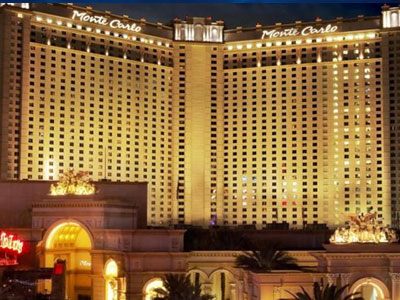 It is perfectly located right in the center of the Strip, yet remains a something of a hidden treasure, as much as that is possible there. The Monte Carlo has been around for quite some time and is very large with tons of entertainment, dining and nightlife options. Not to mention an enormous 90,000 square foot casino floor. It is a beautiful structure with a fusion of European style and Vegas spunk.

The clientele varies quite a bit, from gaming enthusiasts to an older tourist crowd, to a younger group of party goers looking for a great time. Monte Carlo does not generally appeal to families however unlike a number of Strip hotel casinos. Monte Carlo has in recent years seen a number of upgrades and renovations in hopes of attracting both a more affluent and a younger crowd, and in large part the effort has paid off, the casino increasing its popularity even as a number of hotels on the Strip struggle.

Monte Carlo is a good option for anyone looking for a great Strip location at medium rates for the Strip. It is generally highly rated and it is often one of the last hotels on the strip to fill to capacity. Reserving well in advance is always highly recommended, especially on popular holidays and during summer weekends.

Monte Carlo has a very large casino floor at 90,000 square feet. They have all of the classic casino games including Blackjack, Roulette, Craps, Pai Gow Poker, Caribbean Stud Poker, and Baccarat. They have tons of slots with a wide range of limits and games, 2,200 total with popular options like Megabucks. They have a descent poker room, though not one of the most popular spots for poker players on the Strip. They have a medium size Race and Sports Book with large screen televisions and several smaller televisions.

Monte Carlo has tons of rooms and all in a single tower unlike many hotels on the Strip today. They have 2,992 regular 3.5 star rooms and 256 suites. The rooms are nice and well kept, and generally rated high, especially for a 3.5 star hotel. Most stay for the location, gambling, and the other entertainment offered at Monte Carlo, and not necessarily for their luxurious rooms.

Monte Carlo is moderately priced for the Strip. It could be said just about average in fact from the rooms to the restaurants to the gambling. Room rates will depend on the season and how many rooms are available, and gambling limits will vary according to the clientele. Monte Carlo has a number of gambling options for high rollers as well.

The restaurants in Monte Carlo serve excellent food and are usually rated pretty highly. In addition considering the surrounding it could be said they are all moderately priced. Some of the popular options include Andre’s Buffet, BRAND Steakhouse, d.vino, Diablo’s Cantina, Dragon Noodle Co. Café, Monte Carlo Food Court, and the Pub.

There are bars located on the casino floor, and drinks are free for gamblers. Tipping your cocktail waitress is customary. Diablo’s Cantina has a bar during the day and at night turns into a mix, something between a nightclub and a lounge with lax dress codes and live music.

The Street of Dreams shopping and dining area has several options. The Monte Carlo also has Luxury for Less, Monte Carlo Boutique, Nouveau News and Club Casino Royal on the grounds.

Diablo and Brand are not “clubs” by Strip club standards, they do however have live music and are popular party spots.

Monte Carlo offers a wide range of services, everything you would expect from a Strip casino from 24/7 room service to maid service, laundry, concierge, luggage, and much more. It should be noted that Monte Carlo does not offer shuttle service to or from that airport except in special conditions, and arrangements should be made by the individual.

They do have an undisclosed amount of convention space available. Please contact the hotel for more details.

Monte Carlo has a great, if smaller, pool. It is heated and has an excellent atmosphere. They also feature the Easy River ride, a wave pool, and a Jacuzzi.

Monte Carlo has a 1,200 square foot theatre that hosts a number of headliners and it is the home of a popular Strip show as well, Jabbawockeez.

They have a very large spa at 13,037 square feet called the Spa at the Monte Carlo. It has 9 treatment rooms offering all kinds of services including massage. They have a gym and a salon as well. Call for more details.