No of Rooms702
Floors55
LocationOff Strip 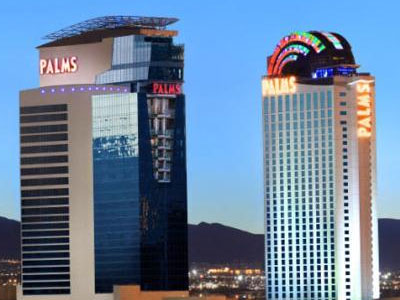 Really it’s a Strip casino, it just happens to not be located on the Strip. Take Flamingo about 1 city block west of the Strip, and on the south side of the Street across from the Rio you’ll see Palms casino along with the adjoining tower Palms Place and the Playboy tower, which is all part of the same complex. It appears smaller than it actually is from the outside, and is easily identified by the white exterior of the main Palms building, and the onyx of the Playboy tower with the giant bunny insignia on the side.

If you came to party in Las Vegas you’ve found the place. Palms is known around the world, due in large part to shows like The Real World as an iconic party location in the new Las Vegas. It is a favorite of a wide range of visitors, from spring breakers to A list celebrities and professional athletes. This is also home of perhaps the most outrageous and most indulgent set of fantasy suites found anywhere in the world. You have completely over the top accommodations that range from full basketball courts in your room to an entire suite designed out of Vodka bottles. Don’t ask the price because if it matters you can’t afford it.

The Palms is one of the top destinations for a younger crowd, the 20 somethings to 30 somethings. This is due in large part to marketing and popular television shows like the one mentioned. However price wise, many in the “Spring Break” crowd and those on summer vacation with limited funds may have more luck directly across the street at the Rio or on Las Vegas Blvd. at some of the smaller places like Tropicana or Flamingo. A stay at the Palms means a lot of skipped keggars and meals for the typical college student. That said, it tends to fill quickly on popular weekends and Holidays geared toward a younger crowd. Booking in advance is highly recommended.

The Palms features a very large 95,000 square foot casino floor with 2,200 slot machines and video poker machines. They feature a score of tables with all of the popular casino games from Blackjack to Craps and many more. They have two high limits areas and a classic poker room. They also have a popular keno room. They have a very nice and modern Race and Sports book with seating for 187 with 180 televisions and 18 big screens.

The Palms itself does not have many rooms at all. In fact it is one of the smallest towers in the entire Strip area with only 703. However with Palms Place just next door there are over 1,000 rooms on the property. The rooms are extremely nice and there is a wide range from regular rooms to the suites mentioned earlier and anything in between.

As mentioned the price of the hotel does not necessarily match who the Palms is targeted toward in large part. Compared to average Strip prices the Palms are a bit on the expensive side pretty much everywhere from room rates, which vary depending on the season and how busy the hotel is, to the restaurants, shops, bars, nightspots and gambling limits. It’s a beautiful property and a great party spot, but be ready to spend.

The restaurants in The Palms have a real modern, sort of chic feel for the most part. Some of the popular options include Alize, Blue Agave Oyster & Chile Bar, Gardunos, Little Buddha, N9NE, Nove Italiano, 24/ Seven, and Bistro Buffet. In addition they have a food court which has a series of smaller eateries with more moderate prices.

There are a couple of bars located on the casino floor, and cocktail waitresses serve drinks free of charge to gamblers, tipping is customary. In addition a number of restaurants have bar areas as well and some of the nightclubs double as bars or restaurants during the day.

There are a few unique boutique shops located on the grounds. Some of the popular one include Huntington Ink, Cosmic Corner, Stuff Store, Leor jewelry store, Playboy Store and a hotel gift shop.

The Palms is one of the most popular nightspots in all of Las Vegas, and all of the world for that matter, both for tourists and for local Las Vegas party goers. Rain is an incredible club with lines to get in regularly snaking through the entire casino. Ghostbar as an amzing 180 degree view of the Las Vegas Strip. Other popular spots include Moon nightclub and the Playboy Club.

They have limited convention space with a number of smaller venues totaling 31,000 square feet.

You’ll find three separate pools on the grounds. The Palms Place turns into Ditch Fridays every Friday during the summer.

They have a 20,000 square foot spa, Spa at the Palms, with a range of services and Amp, a full service salon.