No of Rooms38
Floors2600
LocationOn Strip 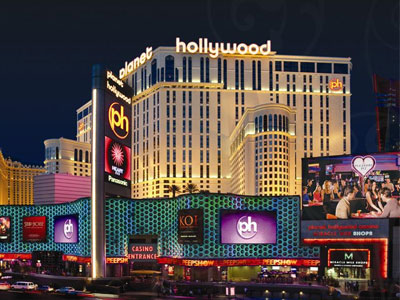 Located central Strip in between Paris and Harrah’s and directly across the street from Caesars Palace, this is a property that has gone through perhaps more renovations, changes of ownership, name changes, and closures than any property on the Strip. It seems however they found their “footing” only a few years ago when, after a complete renovation, numerous additions, and a name change from Aladdin to Planet Hollywood, it is today one of the most popular spots on the Strip. It is easily identified by the unique neon lighting and modern feel and the large digital signage with the PH (Planet Hollywood) logo. The whole thing has a very high-tech modern and exciting feel.

Planet Hollywood caters to a younger party crowd. It is an absolute ideal location for party goers, those on Spring Break, the 20 to 30 somethings here for the summer or a weekend and who like to stay up all night partying than get up the next day for some fun at the pool or to do a little gambling without missing a step. In addition to this crowd however, the Planet Hollywood Miracle Mile of Shops has a range of boutiques that attract a range of people from the high end shoppers to the crowd the rest of the casino caters to.

Location is key here, and this hotel is almost always busy. From the rooms to the extremely popular restaurants, shops, and nightspots, if you like a quite evening you may want to look elsewhere. With that in mind, Planet Hollywood is busiest during any weekend or Holiday catering to a younger crowd, and this is most of the summer and definitely during Spring Break. Calling ahead is always recommended, and booking well in advance may be necessary at these times. Also, Planet Hollywood may fill during popular conventions so keep this in mind.

Planet Hollywood has a very large 100,000 square foot casino with 2,800 slot machines featuring a range of popular slot and video poker games. They have 87 tables featuring all of the popular table games from Blackjack to Roulette. In addition Planet Hollywood has The London Club. This is 35,000 square feet of European style gaming. This too hosts a slew of popular casino games. They have a popular poker room and a smaller Race and Sports Book, 50 seats with 30 televisions and 42 plasmas.

Planet Hollywood is a large hotel with 2,567 rooms. The rooms are vary modern and quite spacious, more so than similarly priced rooms throughout the Strip. Most of the rooms are priced within the medium range.

Planet Hollywood is moderately priced by Strip standards. There are a wide range of restaurants varying from medium range eateries to fine dining. Gaming limits can vary according to the crowd but they are usually comparable to surrounding casinos. Room rates depend in large part on how full the hotel is and the season, but are generally within the average range for the Strip.

You have tons of options when it’s time for a bite to eat. Some within the casino include P.F. Chang’s China Bistro, Cabo Wabo, Spice Market Buffet, Planet Dailies, Strip House, Koi, Yolos, Earl of Sandwich and more. In addition to the hotel restaurants the Miracle Mile of Shops within Planet Hollywood literally has dozens of options including Pampas Brazilian Grille, PBR Rock Bar & Grill, Aromi D’ Italia, Lombardi’s Romagna Mia and many more.

You’ll find bars on the casino floor and drinks are free for gamblers, tipping is customary. In addition many of the restaurants have a bar area or act as a bar/ restaurant.

We haven’t measured the Miracle Mile of Shops, but it sure feels like a mile. You’ll find over 150 often unique, many you cannot find anywhere else, shops throughout.

Gallery is a 17,500 square foot nightclub and is adjacent to the very popular Pussycat Dolls Burlesque Saloon. Krave is also a very popular gay club located right next to the shops.

All of the services expected of a Vegas Strip hotel are also available at Planet Hollywood from maid service to turn down, luggage, laundry, concierge and more. Paris is a stop on the monorail. Shuttle service is available for a fee from an outside company to and from an airport.

There are 2 large pools and two Jacuzzis.