No of Rooms36
Floors2885
LocationOn Strip 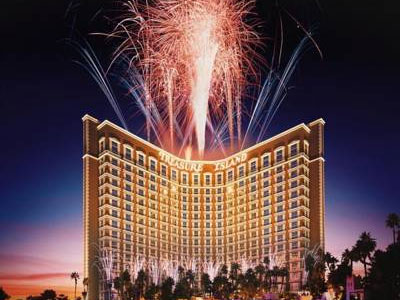 On the southwest corner of Spring Mountain and Las Vegas Blvd, sharing property with the Mirage directly next door and across from the Fashion show mall TI enjoys one of the best locations in town. In addition there is a free tram between Mirage and TI and a bridge for pedestrians to the Fashion show located on the other side of Spring Mountain. A few years ago Treasure Island grew up. She went through a complete modernization, replaced their Disney-esc Arg! Arg! pirates with a sexy Siren show, added a bunch of “hip” restaurants and night spots, and renamed them self TI. The Sirens of TI is one of the favorite free shows on the Strip and can be seen every 90 minutes after dark right outside of the TI front entrance. It features sexy sirens naturally.

Along with a new name and entertainment and a redesign of the exterior came an upgrade to the room accommodations. Generally rated well the rooms are spacious with floor to ceiling windows in many offering an amazing view of the Strip. TI is home of one of Vegas’s favorite bars, closed a couple of years ago at their location further north on the Strip, Gilley’s Saloon, Dance Hal & BBQ reopened in TI and is more lively than ever with visitors and locals alike. They have a slew of restaurants and bars catering to a younger crowd.

TI is a four star hotel by most ratings, and that is a pretty accurate assessment most agree. It is actually the sister site of the Mirage, and gets much of the Mirage overflow in busy seasons and holidays. That said, TI appeals to a slightly younger party crowd and is in most instances less expensive. Booking in advance is a must during any busy holiday or summer weekend. Due to the location it may fill during specific large conventions so call ahead.

They have an “average” casino floor approximately by Vegas Mega Resort standards at 95,000 square feet. They feature all of the popular casino games including Blackjack, Roulette, Caribbean Stud, Pai Gow, Spanish 21, and Baccarat. They also feature 2,158 slot machines and Video Poker machines on the casino floor. They have a popular poker room with a lounge atmosphere and 8 tables dedicated to non-smokers. They have a moderately large Race and Sports book, 152 seats, 23 televisions and 10 big screens.

TI is a very large hotel with 2,885 rooms 220 of which are suites. The rooms are modern, well kept, and many feature an excellent view with floor to ceiling windows. Most agree that for the price the rooms are very large as well, and generally the hotel is rated by visitors moderately well.

TI is priced just about average by Strip standards, and it should be noted the services and accommodations are above average most would agree, so in that sense it is a good deal. Also on that particular intersection TI is by a good measure the least expensive place to stay, eat, and gamble. Rates vary by occupancy and any special events in Las Vegas. Gambling limits are average, also varying by the clientele. There are a range of restaurants, also fairly priced.

You have quite a few options when you’re looking for a meal at TI. Some popular choices include Isla Mexican Kitchen & Tequila Bar, Phil’s Italian Steak House, Kahunaville, The Buffet at TI, Canter’s Deli, Gilley’s Saloon, Dance Hall & BBQ, Khotan, Pho, and Pizzeria Francesco’s. Some quicker and smaller options include Starbucks and The Coffee Shop, or Ben & Jerry’s for something sweater.

The casino floor has bars, also Gilley’s is a very popular bar at night and Isla’s has a bar that is often quite busy as well. Drinks are free for gamblers, tipping is customary.

There are tons of shops in TI appealing to a wide range of visitors: Christian Audigier The Store, The Lobby Store, The Watch Shoppe, Sirens Apparel and Lingerie, The Sirens\' Cove Shoppe, The TI Store, The TI Collection, TI To Go, SCENE, The Mystere Store, TI Kids, Vintage Vegas, Christian Audigier Store, The Pearl Factory, Gilley\'s Trading Post and the $15 Boutique. Plus Fashion Show Mall is right across the street.

Gilley’s is a western themed bar that is packed most nights. It also has a much more relaxed dress code compared to the majority of Vegas nightspots.

All of the services of a Strip hotel are available at TI from maid to luggage, concierge, laundry and 24/7 room service. Shuttle service is available to and from the airport through an outside company for a fee. There is a free shuttle between TI and the Mirage.

A tropical themed pool with a “party” Jacuzzi seating 50.

Home of one of the most popular shows on the Strip, Cirque du Soleil’s Mystere. They also host visiting headliners.